An explanation paragraph is required if you are asked to describe how something works or is done.

For beginning an explanation

at first, initially, to begin with, in the beginning, first of all, the first step

For continuing an explanation

while, as, at the same time, the next step, after, next, then

For ending an explanation 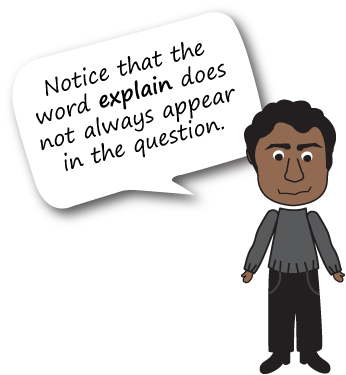 How is cheese made?

The general principles of making cheese from milk have changed little for nearly 3000 years. The aroma, texture, and taste of cheese depend on slight variations of the process used to produce it, but all methods consist of two to four basic steps. The first step consists of the coagulation of the protein ‘casein’ by adding acid or enzyme to the milk. Next, the liquid, called whey, is drained, leaving a semi-solid cheese, called curds, which may be eaten in this form or processed further. All soft or cream cheeses are of this type. Hard cheese undergoes two additional steps in the process. The semi-solid cheese is matured until it reaches the required level of acidity, at which time it is salted and pressed into forms or moulds to give it the distinctive shape and size of a particular cheese. The final step is the ageing process during which the world’s most famous cheeses acquire their unique flavours from the place and length of storage.
Download a print friendly version of this content.